Her eyes paused at the last page of the fairy tale which read “and they lived happily ever after”.

Her eyes sparkled with a gleam of a teenager, caressing the old children’s book which was buried under shambles of magazine ,she dusted the book but still the sides were stained by a colour which lays somewhere between the shades of brown and yellow.

The attic was old dusty comprising of a small spasm through which light penetrated ,towards the left most corner there was a pile of broken wares but attic showed no sign of a kid or a girl rather than this children’s book,an old forgotten deprived fairy tale.

She winked at the book like an old friend ,smiling to herself sat down on the dusty attic skimming through the  pages,which she loved and indeed still love.Her smile didnt reach her cheeks she briskly got up ,as if she did something wrong .she gave a one last longing look at the fairy tale before dropping it and walking away.

she held the broom to herself resuming the cleaning slowly but tears dripped on the floor,she wiped her tears with the dusty hands staining her flawless skin.

She threw the broomstick away descended down the attic using a small ladder,down there was a something you would never dream would see,an exquisite alluring baronial building  .The grand entryway with a sweeping staircase draws you into a voluminous layout . The great room with French doors to the rear deck is the dramatic view of the large lawn visible through colossal wide windows, accompanied by an elegant  dining room more ornate than your imagination would ever extend, tremendous chef kitchen with all modern equipment’s, family room with a marble fireplace and glass doors to the backyard. The divine master suite presents tray ceilings, massive windows, a terrace overlooking the water and  so on…

she advanced soulless through the corridor of this large empty house.She moved into the room which was more stately than any other room in that house,it must be a bedroom as a large bed lay crouching at the farthest corner.She traipsed towards the mirror ,in the mirror she found the girl of twenty five staring back at her,but her eyes look lifeless,the stain of tears and dust still remained but her beauty was something that cant be diminished by any dust or scar.

Pain that lingered in her heart was visible in her eyes ,tears spluttered out as she removed her shirt and threw it off,but on either sides of her shoulder was something that looked like feathers being cut short…tears steadily transformed into sobs as she caressed her cut down wings ,she moved to the window witnessing the raging sea but the tears never ceased ,she was dying inside …she stood there drunk in pain with a heart raging more than the ceaseless waves of the sea above which she would have flew happily if fate wasnt against her…. 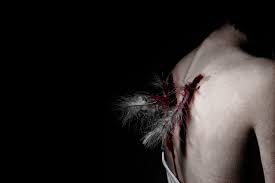 17 thoughts on “Happily ever after”

Thanks for your attention